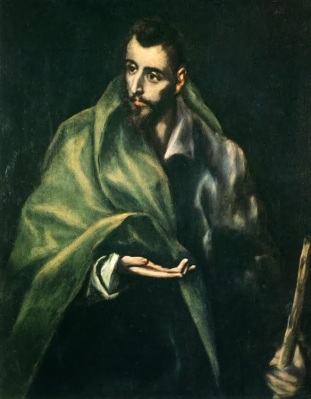 St. James, he is called James the son of Zebedee, or James the brother of John, or James the Greater, or Boanerges, which means Son of Thunder, a nickname he and his brother earned after Jesus preached in a village which failed to hear his words at which point James and John turned and asked Jesus, “Lord, do you want us to call fire down from heaven to destroy them?”  Personally, I like that kind of spirit in my apostles; however, just like them my way of thinking is not always pleasing to the Lord.

As with many of the early saints, there are some rather interesting stories of James.  One of my favorite miracles attributed to him tells how he brought back to life a boy who had been unjustly hanged, and had been dead for five weeks. The boy’s father was notified of the miracle while he sat at supper. The father pronounced the story nonsense and said his son was no more alive than the roasted bird on the table. Legend has it that at that moment the cooked bird promptly sat up, sprouted feathers, and flew away.  I’m tempted to try that the next time I’m at a Kentucky Fried Chicken!

The legends are fun, but it is Holy Scripture where we find the most accurate picture.  Scripture says,  “Jesus was walking beside the Sea of Galilee, he saw two brothers, Simon called Peter and his brother Andrew. They were casting a net into the lake, for they were fishermen. ‘Come, follow me,’ Jesus said, ‘and I will make you fishers of men.’  At once they left their nets and followed him.  Going on from there, Jesus saw two other brothers, James son of Zebedee and his brother John. They were in a boat with their father Zebedee, preparing their nets. Jesus called them, and immediately they left the boat and their father and followed him.”

Immediately they left the boat.  Immediately.  I hear that and I have to wonder how I might respond.  Would I respond “immediately?”  If someone called to me and said, “Follow me,” I would probably reply, “Who are you?  Why?”  I would probably need to see a few more credentials, but after establishing it to be the Lord, would I continue to hesitate?

Remember the story of the prophet Samuel when he was called as a boy.  Samuel had been serving Eli.  One night after they had gone to bed Samuel here’s a voice calling to him.  Being a dutiful servant he runs to Eli saying, “Here I am.  Here I am, you called,” but Eli said that it wasn’t him and to go back to bed.  This happened two more times, but on the third time Eli realized that it was the Lord calling to the boy, so Eli said to Samuel, “Go and lie down, and if he calls you again, say, ‘Speak, Lord, for your servant is listening.’”  And this is what Samuel did and it was then that the Lord spoke to him clearly of his plans and the purpose he should fulfill.

For all of us, if the Lord calls to us by name or says, “Follow me,” we may all be a bit hesitant at first.  We may want to be certain of who it is calling first.  But like Samuel and James, once we determine that it is the Lord, we too must respond immediately.

James started as a fishermen, but when Jesus stepped into his life and called him, James became a fisher of men.  He heard the truth in the message of Christ and he immediately gave up everything, including – in the end – his very life for the sake of that call.