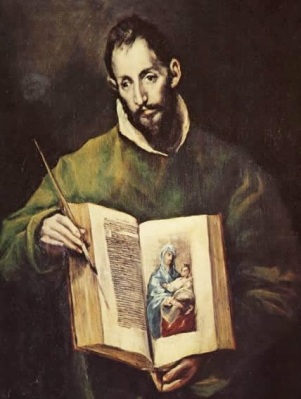 St. Luke, by El Greco
It was last week during our Adult Sunday School program that we were discussing Patron Saints.  It was noted that the naming of churches, St. Andrew’s, St. Theresa’s,  St. Luke’s, etc., were originally based on the relics of the particular saint which were entombed in the altar of a particular church.  Later, there would be numerous guidelines established, but many times churches were given the saint’s name which corresponded with the date they were consecrated.  For example if a church was consecrated on November 30th, it would often be given the name “St. Andrew’s Episcopal Church”, because that is the feast day of St. Andrew.  What I found curious about the naming of our church, St. Luke’s, is that our church has nothing to do with relics in the altar or the feast day of St. Luke, which is Friday.  However, the reason we are called St. Luke’s is noted in our history.

From February 14, 1886: The first morning and evening services were held in the new building at 1st Ave. South and South 29th Street. The initial subscription for building the mission was $1,200. A generous gift of several hundred dollars was received from members of St. Luke’s Episcopal Church of Rochester, New York. In appreciation, the Episcopalians of Billings named their new church in honor of this eastern parish.

We are named in honor of St. Luke’s Episcopal Church in Rochester, New York, which for the record still exists, but has been named The Episcopal Church of St. Luke and St. Simon Cyrene, after two Episcopal Churches there were combined.  Yesterday, after learning all this, I wrote to the rector of the church in Rochester and told him “Thank You” for their original support, that we were doing well, and blessings to them and their work.  He in turn had no idea either, but was delighted all the same to learn of it.

History can be fun.  I can track my own personal history through Montana, Texas, Louisiana, with a brief stint in Wisconsin.  My family history can be followed through the deep south and Texas, but further back you will encounter a few Irish, some English, a bit of French and even Cherokee.  Before that, I’m not real sure except for one little piece and that one little piece is the same for all of us – no, I’m not going to track our history through Adam and Eve.  This history has nothing to do with nationalities or skin tones.  Instead, it has to do with who we all were as members of the human race.  Quoting Isaiah, Jesus outlines part of our common history:

“’The Spirit of the Lord is upon me,
because he has anointed me
to bring good news to the poor.
He has sent me to proclaim release to the captives
and recovery of sight to the blind,
to let the oppressed go free,
to proclaim the year of the Lord’s favor.”

In our common history, we all were once the captive, the blind, and the oppressed, but through Christ we are the rich.  We have been released.  Given sight.  Freedom.  Paul states it clearly in his letter to the Galatians, “in Christ Jesus you are all children of God through faith, for all of you who were baptized into Christ have clothed yourselves with Christ.  There is neither Jew nor Gentile, neither slave nor free, nor is there male and female, for you are all one in Christ Jesus.”  Through Christ we have been freed from our “history” – those things that in the past that separated us from God – and given new life in Him.