The podcast is available here. 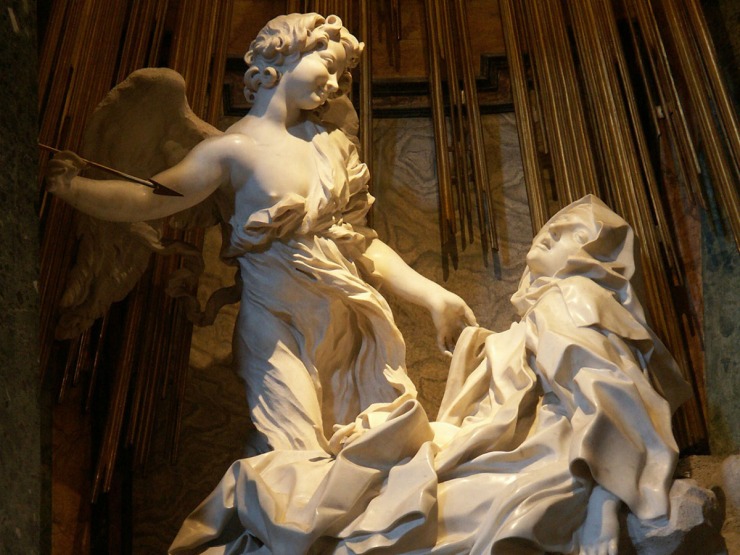 “You are the light of the world.”  Ever hear those words and think to yourself, “I sure hope the world can see off a 25 watt bulb, because that’s about all I’ve got.”

That is probably true for all of us at different times, while there are other seasons when we shine like the sun itself.  Either way, it is about the light and the Light of the World, which is Jesus.  He is our source.

St. Teresa of Avila who received many visions, in the XXIX chapter of her Autobiography describes what this light is and how she received it in herself.  It was Bernini who captured the moment in the statue, The Ecstasy of St. Teresa which is located in the church, Santa Maria Della Vittoria in Rome.  Teresa tells us that she rarely saw angels in bodily form, but on this occasion she did.  Of the angel, she writes:

I saw in his hand a long spear of gold, and at the iron’s point there seemed to be a little fire. He appeared to me to be thrusting it at times into my heart, and to pierce my very entrails; when he drew it out, he seemed to draw them out also, and to leave me all on fire with a great love of God. The pain was so great, that it made me moan; and yet so surpassing was the sweetness of this excessive pain, that I could not wish to be rid of it. The soul is satisfied now with nothing less than God. The pain is not bodily, but spiritual; though the body has its share in it. It is a caressing of love so sweet which now takes place between the soul and God, that I pray God of His goodness to make him experience it who may think that I am lying.

The fire, the light, was love.  The great love of God towards her and her love towards God.  It is this same light that is within us—sometimes bright, sometimes dim—that allows us to be the light of the world that we are called to and even when it is only small, it accomplishes the work of the Lord.

A gentleman was walking one day in the east end of the city of Glasgow. The streets were so narrow, and the houses so high, that little direct sunshine ever reached the houses on one side. The gentleman noticed a ragged, barefooted boy trying, with a small piece of mirror, to catch the sun’s rays and direct them to a certain spot on one of the houses oppo­site. He became interested in the boy’s earnest efforts. “What are you trying to do, son?” he asked. “Do you see that window up there?” the boy replied. “Well, my little brother had an accident two years ago, and is always lying on his back in that room, and it is on the wrong side to get the sunshine, so I always try to catch the light in this little glass and shine it into his room.”

Sometimes 25 watts of light or just a small mirrors worth gathered from a greater source is about all the light we can muster—even with the love of God burning so brightly in our souls—so on such days, gather what you have and shine.  It may only be seen by one small person in a dark room, but to that person, it is life.

“You are the light of the world. A city built on a hill cannot be hid. No one after lighting a lamp puts it under the bushel basket, but on the lampstand, and it gives light to all in the house. In the same way, let your light shine before others, so that they may see your good works and give glory to your Father in heaven.”