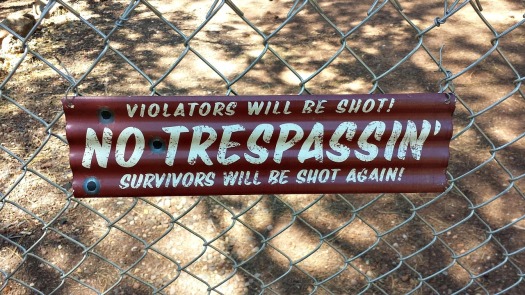 I read those kind of signs and I’m reminded of the joke about the man who complained to God, because a certain church did not think he was their type and would not let him come in.  God responded: “Don’t worry about it son; I’ve been trying to get into that church for years and haven’t made it yet.”  Yet, to welcome is part of our calling.  As the Lord said to Moses, “You shall also love the stranger, for you were strangers in the land of Egypt.” Alban, who we celebrate today, was one who understood this.

Most of what believe about his life is legend.  There are few actual facts other than he lived in Britain and was martyred on June 22 in the year 302 a.d., but it wasn’t until the mid-sixth century that we find someone writing—only a paragraph—about him, which shed some light on why he was martyred.

A Christian priest, later named Amphíbalus (a Latin term meaning chasuble or cloak) was fleeing the pagans in the country north of present day London.  Coming to a house, he knocked and begged entry.  The owner of the house, Alban, who was not a Christian, welcomed him in and hid him for a time.  While there, the priest proclaimed to Alban the Good News and Alban believed, asking to be baptized, but they were betrayed.  A servant of Alban’s reported to the pagans who were searching for the priest and led them to the house.  And it is here that Alban’s hospitality extended to his very life.  He insisted that he and the priest exchange cloaks, clothes so that the priest could escape.  They did, and Alban later turned himself over to pagans.  The Venerable Bede records the trial:

“Then,” said the judge, “of what family or descent are you?” “What does it concern you,” answered Alban, “of what family I am? But if you desire to hear the truth of my religion, be it known unto you, that I am now a Christian, and employ my time in the practice of Christian duties.” “I ask your name?” said the judge, “which tell me immediately.” “I am called Alban by my parents,” he replied, “and ever worship and adore the true and living God, who created all things.” Then the judge, in a rage, said, “If you will enjoy the happiness of eternal life, do not delay to offer sacrifice to the great gods.” To which Alban answered, “Those sacrifices, which you offer to devils, can neither avail the offerers any thing, nor obtain for them the effect of their petitions; on the contrary, whosoever offers sacrifices to these idols, shall receive the eternal pains of hell for his reward.”

The judge was not pleased with Alban’s response.  Alban was taken, scourged, and beheaded, making him the first recognized Christian martyr in Britain.  That night, legend has it that a cross appeared in the sky and the angels sang:

“Alban, a man of rare renown,
Has won the martyr’s glorious crown.”

Jesus said, “Whoever welcomes you welcomes me, and whoever welcomes me welcomes the one who sent me.”  Alban, although a Christian for perhaps only a few hours, understood these words.  Through the words of the priest, he received the Good News, and no longer feared what the pagans would do to him.  He who knows that death has been conquered is not concerned with his own death, but only the will of God and the fulfillment of God’s command to love, not just the one you know, but the stranger as well.

The term “radical hospitality” gets batted around on occasion.  If we wish to practice it, then we can look to Alban to see how it is done properly.