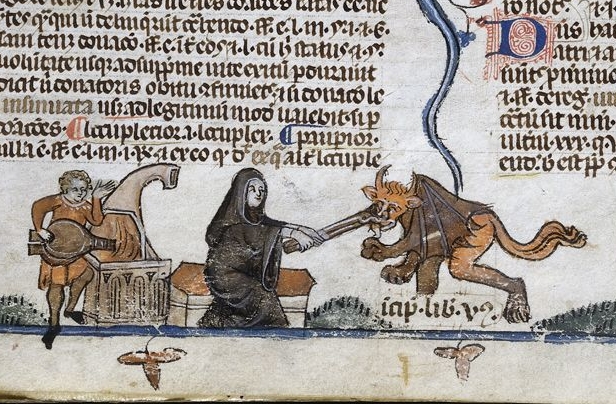 In the year 909, an expectant mother attended Candlemas in a crowded church.  As part of the service, everyone held a lit candle.  Suddenly, all the candles went out except for the one held by the expectant mother.  All those in attendance then came to her and relit their candle from hers.  When all were burning again, a holy many prophesied, “This child that is in her womb shall light all England with his holy life in time to come.”  That child was Dunstan and he did just that.

It seems that with each new king in England, Dunstan would rise or fall from favor, but in the times of favor, he did much to increase the sanctity of the church and would go on to become Archbishop of Canterbury.  As Archbishop, he continued that reform and did so by correcting those in error, even the king, who Dunstan once gave penance stating that for seven years the king would not be allowed to wear his crown—which he didn’t!  Following his penance, it was Dunstan who placed the crown back on the king’s head.  Much of the reforms he put into place were handled in a similar manner, which perhaps gave rise to one of the greatest legends about his life.

Legend says that Dunstan, who was also a great artist and craftsman, was working in a blacksmith shop.  While going about his business, a man appeared at the window and asked if Dunstan would make for him a chalice.  He agreed and let the man in; however, soon afterwards, the man began changing.  At times he was the old man, then a young boy, then a beautiful woman.  Dunstan realized that this was the devil trying to trick him, but instead of jumping in fear, he went about his work and casually placed the tongs on the fire.  When the tongs were red hot, he snatched them up and grabbed the devil by the nose.

The devil raged, but could not get free of Dunstan’s grasp.  When Dunstan felt as though he had won the battle, he pulled the devil outside by his nose and released him.  The devil fled down the road crying out, “Woe is me! What has that bald devil done to me? Look at me, a poor wretch, look how he has tortured me!”  Ever notice how the bully cries the loudest when they finally get their due?  Anyhow… one of the English folk rhymes tells the story: 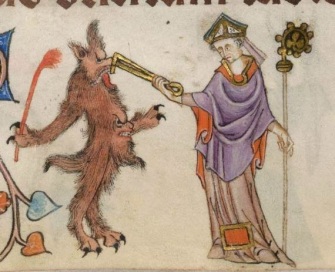 St Dunstan, as the story goes,

Once pull’d the devil by the nose

With red-hot tongs, which made him roar,

That he was heard three miles or more

Dunstan was one who did not hesitate to grab by the nose the devil, kings, priests, religious, or laity and bring them to a place penance.

Jesus said, “Who then is the faithful and wise slave, whom his master has put in charge of his household, to give the other slaves their allowance of food at the proper time? Blessed is that slave whom his master will find at work when he arrives.”  Dunstan was faithful and therefore was one who was placed in charge of many.  In small ways and great, we are also placed over others, whether it be in our jobs, families, or other organizations.  I don’t recommend grabbing anyone by the nose, but we should all be prepared in our service to God, to watch over and correct those placed in our responsibility as Dunstan cared for those placed in his.