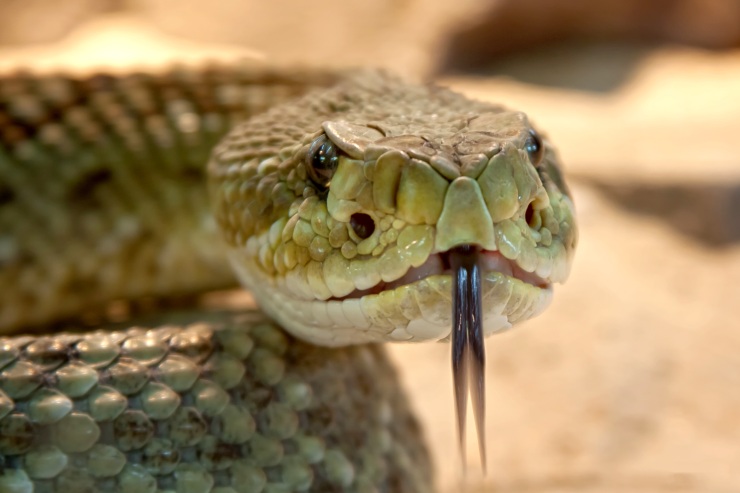 Some rather interesting news came out of Alabama in 1992: The article says that the Rev. Glenn Summerford, the former pastor at the Church of Jesus with Signs Following is “currently a guest of the state correctional authorities. Pastor Summerford was convicted in the 1991 attempted murder of his wife, Darlene.” What did he do to his beloved? Records indicate, “he forced [her to hold] her hand in a box full of rattlesnakes until she was bitten.” Rev. Glenn Summerford contended that he was innocent and that the only reason his wife was bitten was because “her faith wavered.”

Another rather interesting article came out in 1998: The Rev. John Wayne “Punkin” Brown Jr., 34, of Parrottsville, Tennessee, died after being bitten by a four-foot timber rattlesnake that he had been handling while preaching. The article stated, “On Saturday, “Punkin” was clutching the snake in his right hand when it bit him on the middle finger of his left, between the knuckle and first joint. The Rev. Gene Sherbert, of Temple, Georgia, was next to Brown when this happened and reported that, “He looked at me and I knowed he was bit and I put it (the snake) back in the box.” The Rev. “Punkin” died a few minutes later. He might have made it, but he kept on preaching another quarter hour after being bitten. FYI: the Rev. “Punkin” is cousin to the Rev. Summerford who tried to kill his wife.

“Why?” do you ask would they be handling snakes? Simple: the Bible says so, Mark 16:17-18: “And these signs shall follow them that believe; In my name shall they cast out devils; they shall speak with new tongues; they shall take up serpents; and if they drink any deadly thing, it shall not hurt them; they shall lay hands on the sick and they shall recover.” I think the one thing these good folks forgot was that Scripture also says, “Thou shall not put the Lord thy God to the test.”

I believe that it was in John Grisham’s novel, The Last Juror, that one of the characters recommends, if attending a snake handling church, it’s best to sit on the front row. It seems that the snakes are kept on ice in a box, and those on the first row handle them while they’re still in a state of hibernation; however, by the time the snake reaches the back of the church – wide awake!

This is one we discussed a few weeks ago: the folks in the day of Moses had a healthy understanding of the issue of snakes. It was best to stay away from them because the ones wandering in the desert were killers. It happened on one particular day that the Israelites began to complain once more against God, so God sent them a plague of snakes and many people perished. This drove them to repent of their murmurings, but the snakes were still there, so they asked Moses to help and God told Moses to make the snake out of bronze, Nahushtan, and then to place it on a pole. When the people were bitten, if they would look at the bronze snake, they would be saved.

Leading up to our Gospel reading, Nicodemus, who is a Pharisee, comes to Jesus at night. He comes at night because he is afraid to be seen by others visiting with this rabble-rouser, Jesus. Even so, Nicodemus believes the signs that Jesus has been performing. Jesus tells Nicodemus that he must be born from above in order to be saved. Nicodemus fails to understand what Jesus is saying, so Jesus responds by saying to him, “Just as Moses lifted up the serpent in the wilderness, so must the Son of Man be lifted up, that whoever believes in him may have eternal life.”

The message to us is no different. We too must look upon the judgment of our sins – death – and believe that it is through that judgment – in the person of Christ Jesus crucified – that we are saved. We must recognize that our sins lead to eternal death yet, God so loved the world – so loved us – that he gave his only Son to suffer death for us, so that everyone who believes in him may not perish but have eternal life.

Believe and have eternal life. Sounds like foolishness to many and to many others it is too simple. God wouldn’t simply give salvation away so freely. We must earn that right to get into heaven. We must follow the rules. Sit, stand, kneel, bow when we are supposed to. We must live the perfect boring Christian life. We must be able to handle snakes without our faith failing for even a moment. Put one toe out of line and you will be bitten, you will be hell bound. We apply this way of thinking to others and to ourselves, and we end up echoing Paul’s question, “Who then can be saved?” In our logic we answer, “No one… not even ourselves.” To any who think in such a way, I would remind them of the day that Jesus was crucified between the two thieves:

One of the criminals who hung there hurled insults at him: “Aren’t you the Messiah? Save yourself and us!” But the other criminal rebuked him. “Don’t you fear God since you are under the same sentence? We are punished justly, for we are getting what our deeds deserve. But this man has done nothing wrong.” Then he said, “Jesus, remember me when you come into your kingdom.” Jesus answered him, “Truly I tell you, today you will be with me in paradise.”

Did the thief follow all the rules? Did he get all the answers right? Did he lead a perfect life in the eyes of God? Was he able to handle the snakes without getting bitten? Or… did he simply look upon his own judgment and see his salvation?

Let us pray: O Jesus, it is not the heavenly reward You have promised which impels us to love You; neither is it the threat of hell that keeps us from offending You. It is You O Lord, it is the sight of You affixed to the Cross and suffering insults; it is the sight of Your broken body, as well as Your pains and Your death. There is nothing You can give us to make us love You. For even if there were no heaven and no hell we would still love you as we do! Amen.