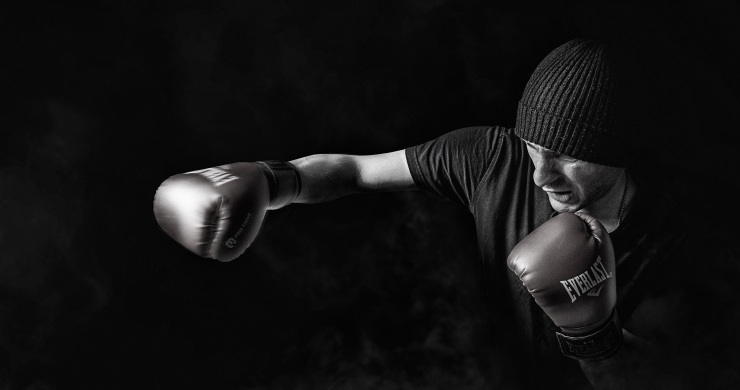 True story: In the mid-1970s a particular young man was so broke that he had to sell his beloved dog for $25, his wife’s jewelry, and lived in a bus depot for awhile because he could not afford rent. One day he goes to a sporting event and was inspired to write a movie script. He went home and in three days produced his first draft. To his surprise, the movie studios loved it and began bidding for it. The first bid was $35,000. Not bad for a fella with $106 in the bank. The bidding kept going and eventually reached $325,000, the highest amount ever offered for a movie script. However, the fella turned down the offer, because he had placed one condition on the sell of the script: he was to play the leading man; never mind the fact that the studio bosses were already trying to get Robert Redford, James Caan, or Burt Reynolds for the lead. He said, “I knew that if I took the money I’d regret it for the rest of my life. And the picture was about taking that golden shot when you finally get it.” He held out and the studio finally gave in. The young man was paid $35,000 dollars for his script and was allowed to star in the movie. The studio didn’t have much hope in the show doing well, so it fell into low budget production. When it hit the movie theaters, they all knew that Rocky was going to be a winner, including the author of the script and the lead actor, Sylvester Stallone.
That movie won three Oscars including best movie in 1976 (Stallone showed up in a rented tux without a tie, because the tie he was wearing broke during his cab ride to the awards ceremony). To date, the Rocky franchise has earned over $1 billion. Stallone’s net worth is a bit more than that $106, it is now somewhere in the neighborhood of $400 million.

What does this have to do with Andrew who we celebrate today? “As Jesus walked by the Sea of Galilee, he saw two brothers, Simon, who is called Peter, and Andrew his brother, casting a net into the sea—for they were fishermen. And he said to them, ‘Follow me, and I will make you fish for people.’ Immediately they left their nets and followed him.” The same is said about James and John when Jesus said to them, “Follow me.” “Immediately they left the boat and their father, and followed him.” I am always fascinated by that, “immediately they” left what they had and followed Jesus. Immediately. And I have to ask, “Why?” I think we see a glimpse of the answer in that story of Stallone.

Stallone knew who he was and what he had… at least what he believed he had. He also knew what he wanted for his life. Something he had been pursuing for many years and when he finally saw it, what he had been wanting and working for, he grabbed hold and no amount of money would sway him from it. Although he was chasing after worldly goals, it would seem that Andrew and the others also possessed that same characteristic when it came to following the things of God. They seem to be those who said, “For now, I will fish, but when I see that which my heart is longing for, I will grab ahold and no amount of money or security will sway me.” They had this idea for what they wanted in their lives, and this idea could only be fulfilled in God; and when God walked past and said, “Follow me,” these fishermen cast everything else aside and followed him.

In a similar manner, Jesus says to each of us, “Follow me,” and like those first disciples, we are to respond immediately. That does not necessarily mean casting your life aside, but for each of us, it does mean faithfully following him where he has called us, whether that be at home caring for children, at work, in leisure enjoying creation, wherever. We are called to be faithful disciples, fully engaged in our life with him, following where he leads, and prepared to renounce any other offer that attempts to lure us away.