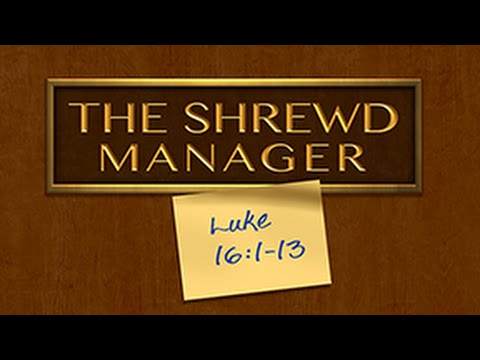 Have you ever read this parable and simply responded, “Huh?” “Then the master commended the dishonest steward for his prudence.” Something just does not seem to be making sense here.

Julian the Apostate, a forth century Roman emperor wrote that this parable, “Showed the inferiority of the Christian Faith and its founder [Jesus]” by promoting such evil. Yet, a closer examination demonstrates that Jesus is not commending the steward for lying and stealing, but instead for being shrewd, for thinking. Remember Jesus says, “Behold, I send you out as sheep in the midst of wolves. Therefore be wise as serpents and harmless as doves.”

I studied business when I was at Stephen F. Austin and during one of our management classes the professor told the story of a grocery store that had a fairly steady business, but that was constantly losing money. The experts couldn’t figure it out so they brought in some other experts who did an inventory to see if the merchandise was being stolen. There was a little, but not nearly enough to make up for the loss, so when the loss continued over several months they decide to do an inventory of the entire store. Everything. They closed the store and started counting, down to the number of shelves and light fixtures hanging from the ceiling. What did they discover? An extra checkout line! It seems the manager of the store had at some point done a bit of remodeling on his own and installed an entirely new checkout line that remained open all the time, but instead of the receipts from that register going to the store, they went directly into his pockets! Again: Stealing, bad! But my goodness, that was brilliant!

When Jesus commends the dishonest steward, he is not saying that it was good that he was lying and stealing, he is saying that the steward found himself in a very bad situation, but because he was clever, he was able to think his way out of it. He is commended for his cleverness, not for his wickedness.

What is the point the parable is making? Jesus is saying that we, as the human race, are clever in all sorts of ways. We are able to figure out scams and how to improve our situations. We know how to work the system and all that, but that we lack the drive and the desire – the shrewdness – to figure out how to follow the path of righteousness and achieve our eternal salvation. As Jesus says, “For the children of this age are more shrewd in dealing with their own generation than are the children of light.”

The parable is asking us to consider several questions. In your dealings with the world, are you shrewd? Are you wise? Do you use your gifts, talents, skills, resources, and your time to better yourselves, your situation and that of your families? Everyone nod your head and say, “Yes, Fr. John.” But do you use those same gifts, talents, skills, resources, and time – that same shrewdness and wisdom – to improve your relationship with God? To work out your salvation? To discern His will for your life? Not only that, have you used those same talents to not only to increase your relationship with God, but to also increase his kingdom on earth?

Jesus is saying, be as shrewd – as wise – in your dealings with the things of heaven as you are in dealing with the things of this world. “Seek first the kingdom of God and His righteousness, and all these things will be provided for you.”