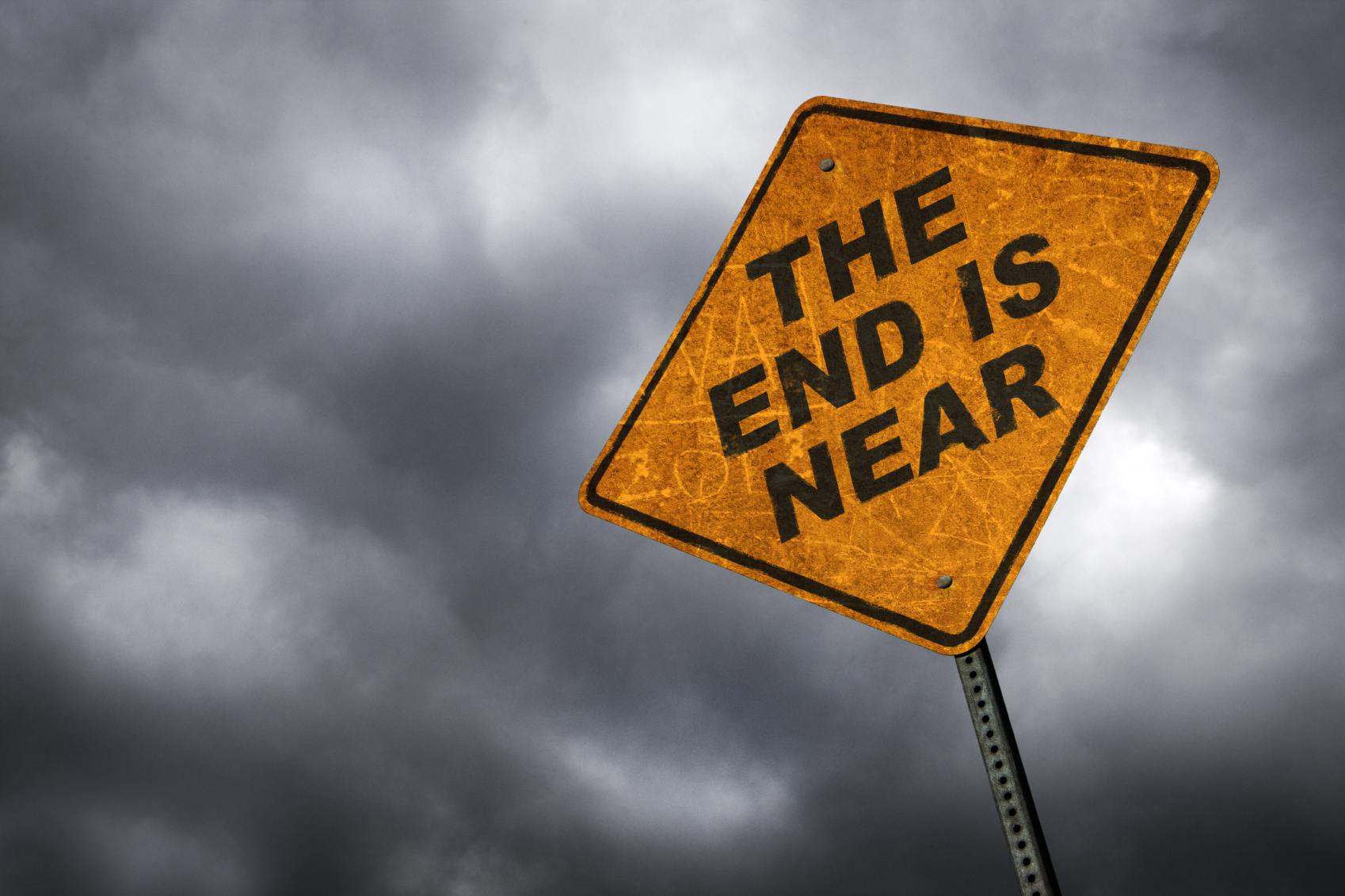 On a road through a desert in Arizona, a preacher named Nathaniel Evans walked every day, preaching to the many people who roared past in their cars. “Repent, the End of the World is Nigh!” was his constant theme. One day, as he was walking, he came to a big lever in the middle of nowhere, just by the side of the road. ‘Pull this to end the world’ said the sign attached to it. Now Nathaniel saw this as the perfect spot for him to preach, and soon many automobiles were parked nearby, the people all swayed by his powerful preaching. All was well, until there were so many people, and so many cars, that the road was nearly blocked. Then a big 18-wheel rig came down the highway, and couldn’t stop in time. The driver had a choice: run over Nathaniel, or run over the Lever. As the driver explained to the Highway Patrol later, he actually had no choice. Pointing to Nathaniel’s lifeless body, he said “Better Nate than Lever.”

Folks have been waiting for the end of the world for a long time and no one has ever predicted it correctly, but that hasn’t stopped them from trying or from attempting to scare us in the process. There are even some that try to profit off the end of the world. For example, the following advertisement once appeared in a Christian magazine: BE PREPARED FOR THE END TIMES! Our Deluxe Survival Kit includes enough long-lasting, freeze-dried food to supply a family of four for three months, fifty gallons of pasteurized water, a completely stocked medical case, and a .357 magnum revolver in case your neighbors attempt to take advantage of your Christian foresight. — Tribulations Outfitters, Inc., Lawing, Utah. I’m a firm believer in protecting yourself, but I’m hoping nobody accidentally shoots the Lord with their brand new .357 Magnum when he returns.

This may all sound a bit crazy, but as a Christian people we do believe that Christ will return and when he does he will set all things right. The old shall pass away and the Lord will create all things new. And it is in our Gospel that Jesus provides the events that will signify his return? So the big question is: Have they come to pass? Is the time near? Let’s break down this Gospel a bit and see.

First, Jesus speaks of the temple in Jerusalem where He and the all the other Jews came to worship. It was a magnificent structure with some of the stones of the wall weighing up to 360 tons. Jesus says that it will be destroyed. In the year 70 AD the Romans came in, wiped out Jerusalem, and completely destroyed the temple. Today, all that remains is the western wall, known as the Wailing Wall.

Other signs: false prophets will come in Jesus name declaring “I am he.” I am the Messiah, the one who can save you. I’m not sure who is still in, but there are at least a dozen individuals running for president who tell us that they, and only they, can save us. There are many others who, for a small fee, promise us wealth, health, and eternal happiness. Watch TV commercials and you will see advertisements that will tell you all about how you can take this drug or that one and live forever (provided you don’t succumb to one of the side effects such as death). I don’t know that the one drug that will make your eyelashes grow longer will make you live longer, but at least during your lifetime you won’t be shamed for having short eyelashes.

What about the wars and insurrections. Syria. Afghanistan. Pakistan. Sudan. Presently there are almost 30 active wars in the world with ten of them classified as “high intensity conflicts” because there are more than 1,000 causalities per year. That also pretty much covers nation rising against nation and kingdom against kingdom.

There will be great earthquakes. Can you say, “Oklahoma.” Famines – most of Africa presently suffers from famine. Plagues? Have you had your flu shot? Dreadful portents and great signs in the heavens? Just toss in a good dose of global warming, increased sun spots, and the occasional UFO and by golly we are batting a 1000.

As far as being arrested in Jesus name, it happens all over the world, and 1,000s of Christians are put to death every year for their faith.

We look at all this and more and we have a complete fulfillment of the signs that Jesus spoke of in our Gospel. So today we can say with 100% confidence, “The End is Near.”

Or is it? Hasn’t it been like this all along? Haven’t there been wars, plagues, earthquakes, etc.? Of course there have. That’s why all those people I mentioned earlier kept predicting the date.

I’m not making light of the end of days. That time will come. As we say every week, “Christ has died. Christ has risen. Christ will come again.” Thanks be to God! Yet as we look at these signs, we have a tendency to think of them as the main event, but this is just not the case. The main event is what Jesus has accomplished and provided to us. What is that main event?

Jesus says, “Your Father in heaven is not willing that any of these little ones should perish.” Jesus says, “For God so loved the world that he gave his one and only Son, that whoever believes in him shall not perish but have eternal life. Jesus says, “I give them eternal life, and they shall never perish; no one will snatch them out of my hand.” St. Peter writes, “Praise be to the God and Father of our Lord Jesus Christ! In his great mercy he has given us new birth into a living hope through the resurrection of Jesus Christ from the dead, and into an inheritance that can never perish, spoil or fade.”

In the novel, Cat’s Cradle by Kurt Vonnegut, an important book comes to light. It’s title “What Can a Thoughtful Man Hope for Mankind on Earth, Given the Experience of the Past Million Years?” The chief character is anxious to read it. But when he does, he finds that it doesn’t take long. The whole book consists of one word: “Nothing.” What can man hope for from the world? “Nothing.” But as a Christian people our hope is not of this world. Our hope is in the Living God. Our hope is in the one who declares. “I am resurrection and I am life.” Our hope tells us that not a hair on our head will perish. We have eternal life through Christ Jesus.

There is a wonderful George Iles quote, “Hope is faith holding out its hand in the dark.” When you hold out your hand in this dark and oftentimes scary world with its signs and portents, you can know within your very soul that God will be there to take it, to lead you, to guide you, and to give you peace. Jesus says, “When the world looks like it is going to heck in a hand basket, know that I will be there in the dark to take your hand and see you through.”

There will always be wars and rumors of wars, plagues, famines, and all the rest. But even in the most dreadful of times, there is hope. There is Jesus, and in Him, we are saved.

Let us pray: Jesus, magnificent Fountain of Hope, in times of happiness and despair, you are the motivation of our hearts, our hopes of greater things to come. Our consciousness is obsessed with You; we hunger for the day we will meet, when our longings will become a reality. Transmit to our souls daily reminders to always hope for greater things. For without hope, life is futile. Hope is a spiritual pillar of faith, containing many rewards of its own! Amen.