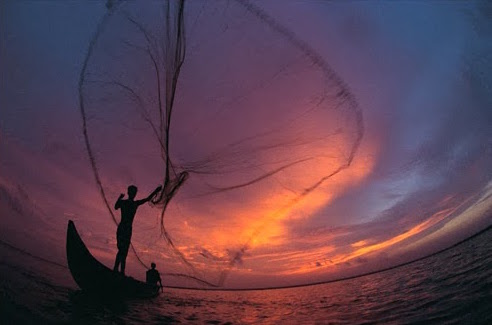 In the year 1206 the great Mongolian Empire began under the rule of Genghis Khan. Over the next century and a half, the Mongol armies conquered much of Asia including most of what is now Russia. For years the Mongols oppressed the people, but there was certain resistance along the way. Before one battle, the Prince of Moscow, Dmitry Donskoy, came and sought the advice of Sergius, the Abbot of the Monastery of the Holy Trinity in Moscow. Sergius encouraged him. As the battle commenced, a great and miraculous sandstorm blew up in the face of the Mongols and gave Donskoy the opportunity to go onto achieve a great victory, which “laid the foundation of his people’s independent national life.”

Abbot Sergius’ support of the prince and his love of the Russian people led him to be highly revered and he is still known as “The Spiritual Father of Russia.” “The Modern historian Klutchévski declared that the entire Russian people owe their whole freedom and liberation to the moral education and spiritual influence of one man: Sergius of Moscow.”

Professor Klutchévski wrote, “There are historical names which escape the barriers of time and whose work profoundly influences subsequent generations, because the figure of a personality is transformed into an idea. Such is the case with St. Serguis.”

The figure of a personality being transformed into an idea. John F. Kennedy, perhaps another of those personalities transformed into an idea, said during a speech in 1963, “A man may die, nations may rise and fall, but an idea lives on. Ideas have endurance without death.” In such cases, the idea is not the light bulb over the head moment, but is instead the desired outcome where everything is laid on the line in order to achieve success. The life of St. Sergius may have transformed into such an idea, but he was working from an idea that had been put forth centuries before: “The kingdom of heaven is like a net that was thrown into the sea and caught fish of every kind; when it was full, they drew it ashore, sat down, and put the good into baskets but threw out the bad.”

Jesus planted this idea of being fishers of men in the minds of his disciples. That idea survived the death of the disciples and centuries later Sergius continued to put everything on the line, just as the disciples did, in order to achieve the desired outcome. He took that one idea and cast a net over the people of Russia and also became a fisher of men.

Following the example of St. Sergius, illuminated in the light of God, keep this idea that Christ established set firmly before you, and cast your net. Join the disciples, Sergius and so many others by becoming fishers of men. How? You don’t have to catch an entire nation, thousands, or even hundreds. “I tell you, there is rejoicing in the presence of the angels of God over one sinner who repents.” By simply sharing your story of God with one person or inviting one person to church, you are casting the net and doing the work of Christ.