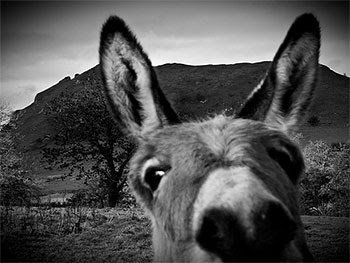 One of the fables of Aesop tells the story of a man, a boy, and a donkey. An elderly man was traveling with a boy and a donkey. As they walked through a village, the man was leading the donkey and the boy was walking behind. The townspeople said the old man was a fool for not riding, so to please them he climbed up on the animal’s back. When they came to the next village, the people said the old man was cruel to let the child walk while he enjoyed the ride. So, to please them, he got off and set the boy on the animal’s back and continued on his way. In the third village, people accused the child of being lazy for making the old man walk, and the suggestion was made that they both ride. So the man climbed on and they set off again. In the fourth village, the townspeople were indignant at the cruelty to the donkey because he was made to carry two people. So the boy and the man strapped the donkey to a pole by his feet and began to carry the donkey. Unfortunately, when they came to a bridge, the boy tripped, sending the donkey into the river below where he drowned.

In our Gospel reading, Jesus said, “We played the flute for you, and you did not dance;
we wailed, and you did not mourn.” He then goes on to say that the people criticized John the Baptist for his severe asceticism and criticized him for being a friend to the outcast and sinners. Both at either end of the spectrum and both criticized. What would the critics have preferred? What could John or Jesus have done to not be criticized by anyone? Absolutely nothing. Why? The philosopher Voltaire stated it like this, “If God created us in His image we have certainly returned the compliment.” The people wanted God’s message to be the message they wanted to hear, not the one that God wanted to give them.

We can find ourselves in a similar predicament. If we preach the Gospel message too strongly, then we will be referred to as Bible thumping fundamentalist. If we soften the message to make it more palatable, then we will be labeled apostate liberals. If we try and hold these two things in tension, then it will be lukewarm fence-sitters. What are we to do? The answer lies in following in the footsteps of John and Jesus, which was to disregard the clamoring of their detractors and seek to do God’s will and to please Him alone. Jesus said, “for I have come down from heaven, not to do my own will, but the will of him who sent me.”

If we try and please everyone in the way that we present and live out the Gospel message, then we will end up carrying a donkey that will eventually drown in a river. It just won’t work. But if we seek after God’s will and do as He asks, then we will accomplish much. In doing so, we will still have critics, but God won’t be one of them.

Thomas à Kempis wrote, “Who are you, then, that you should be afraid of mortal man? Today he is here, tomorrow he is not seen. Fear God and you will not be afraid of the terrors of men. What can anyone do to you by word or injury? He hurts himself rather than you, and no matter who he may be he cannot escape the judgment of God. Keep God before your eyes, therefore, and do not quarrel with peevish words.”

Keep God before your eyes. Seek to do His will. And let others carry the donkey.