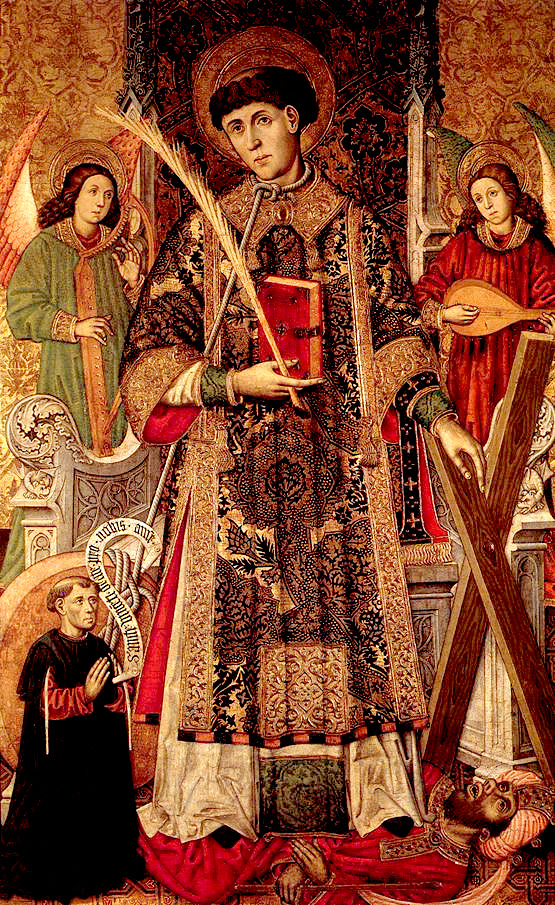 Who is he standing on?  Follow this link for the answer.

Born in Spain, Vincent was a Deacon under Bishop Valerius. In the early fourth century, the Christian community of Spain came under the persecution of Diocletian, at which point Vincent and Valerius were arrested. They were told to renounce their faith or face torture and death. According to legend, Valerius had a speech impediment, so he would often call on Vincent to preach for him. It was here too, at the time of their trial, that Vincent would again speak for his Bishop. According to Butler’s Lives of the Saints, Vincent said to him, “Father, if you order me, I will speak.” “Son,” said Valerius, “as I committed to you the dispensation of the word of God, so I now charge you to answer in vindication of the faith which we defend.” Apparently Vincent proclaimed the Christian faith with such zeal that he further infuriated the local authorities. So much so that Valerius would later be sent into exile, but Vincent was forced to endure the most grotesque torture and was eventually put to death. Personally, I hope to one day be able to preach a sermon that so inflames the listeners as Vincent obviously did.

This entire event reminds me of the words that St. Peter speaks to us in his first epistle, “Who is going to harm you if you are eager to do good?  But even if you should suffer for what is right, you are blessed. ‘Do not fear their threats; do not be frightened.’  But in your hearts revere Christ as Lord. Always be prepared to give an answer to everyone who asks you to give the reason for the hope that you have.” Always be prepared to give an answer for the faith that is in you.

Many will tell us – and I agree with them – that we should all have purposely sat down and considered our faith, so that when given the opportunity to proclaim it, we have a well thought out answer. But the question for many of us has nothing to do with the answer we will give. The questions is whether we will or not. If the opportunity is presented for you to share your faith, will you speak or will you remain silent?

I’ll put this in the form of a question: If given the opportunity, like Vincent, to boldly proclaim your faith, but you fail to do so, have you denied Christ? Have you committed a sin of omission? I’m not talking about standing on a street corner, waving a floppy Bible, and shouting Holy Scripture at those who pass by. But in the midst of your family and friends, when the opportunity presents itself, have you given “the reason for the hope that is in you”? I believe that we can deny Christ by renouncing Him, but I also believe that we can deny Him by remaining silent when we should have spoken up.

Vincent stands as one who would remind us that in good season and bad, in ease and discomfort, we are to proclaim God.