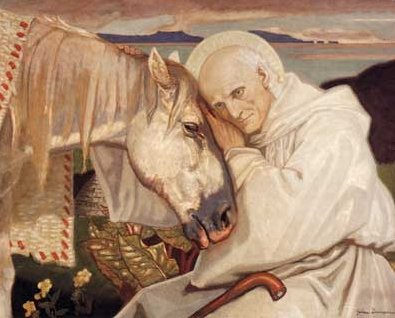 From Numbers 35: “The Lord spoke to Moses, saying: Speak to the Israelites, and say to them: When you cross the Jordan into the land of Canaan, then you shall select cities to be cities of refuge for you, so that a slayer who kills a person without intent may flee there.  The cities shall be for you a refuge from the avenger, so that the slayer may not die until there is a trial before the congregation.”

This idea of a city or place of sanctuary has been quite common throughout the ages, eventually leading to the legal establishment of churches becoming sanctuaries for those who had committed crimes. So, a criminal who is being pursued could run to the church and seek asylum within, which could last up to 40 days. To forcibly remove someone who is in a sanctuary could lead to excommunication from the church.

As good Episcopalians you probably already know this, as it is the red doors of our church that signify this church as a place of sanctuary, no longer against legal pursuit, but as a sign of spiritual asylum, away from the terrors of the world that continue to pursue us.

In the year 561 the friend of a monk sought out asylum in a monastery, a legal sanctuary, in Ireland for an accidental murder that he had committed. However, the king’s men who pursued the young man disregarded the right of sanctuary, went into the monastery and tore him from the arms of the monk who was assisting him, took him outside the walls, and put him to death. This event angered the monk to such an extent that he went out and raised an army of his own and attacked the king’s men, a battle that led to death of 3,000 soldiers.

For his actions, the monk was to be excommunicated, but instead was sent into exile, where his penance was to save the soul of one individual for every soldier that was killed. He and twelve of the others got into a boat and let it go where it would. It landed on an island that was twelve miles off the coast of Scotland. The island was three miles long and one mile wide. It is called Iona. The monk was Columba, and even though he had some rough beginnings, he would go on to be great, a lover of both men and animals.

One story tells of how he had been walking along a path when he became tired and sat down on a stone. While there, an old white horse that lived at the monastery came up to him, placed his head on Columba’s breast, and – according to legend – refused to leave, shed tears, and moaned until Columba blessed him.

Even though only a priest, many bishops and kings sought him out for advice and the island of Iona became known as a sacred place. It became the place of burial for 48 kings of Scotland, four kings of Ireland, and eight kings of Norway. When King Aidan was to be consecrated, the king insisted that it take place on Iona and that Columba be the one to crown him.

The last verse of John’s Gospel: “But there are also many other things that Jesus did; if every one of them were written down, I suppose that the world itself could not contain the books that would be written.” With regards to Columba and Iona, I suppose we could write enough books, but there are far to many events to discuss today. He is one of the individuals in our Christian history that I recommend to you all for additional studies. It is truly fascinating.

For today, in remembering the works of Columba, think on what the Prophet Isaiah wrote: “The spirit of the Lord God is upon me, because the Lord has anointed me.” Those words were written for Isaiah, for Jesus, for those like Columba, and for us as well, for the Spirit of the Lord is upon us and He has anointed us to go forth into the harvest, like those before us, and produce good fruit.