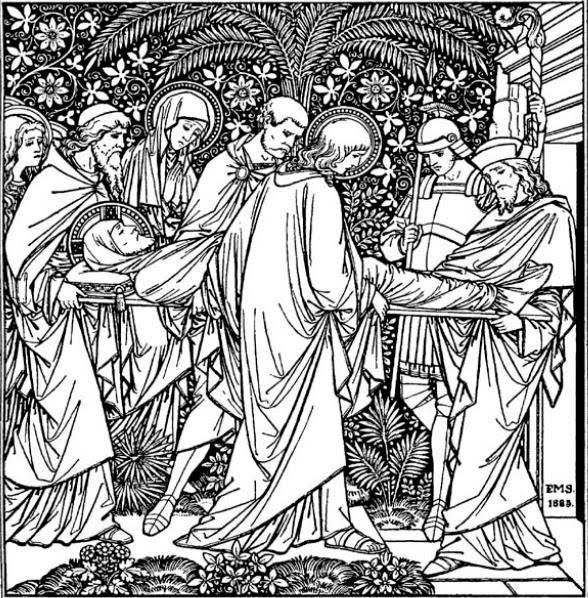 Bishop Jack Nicholls, the Bishop of Sheffield, once asked a sixth grade girl where she thought Jesus was between Good Friday and Easter. She replied, after she had thought a little, ‘I think he was in deepest hell looking for his friend Judas.’ Something to think about, but where is Jesus in this present darkness? Where might we seek him?

He is dead. “He did not count equality with God a thing to be grasped. He emptied himself freely accepting death on a cross.” So where is Jesus? You know the words of the Creed: “He suffered under Pontius Pilate, crucified, dead, and was buried, he descended into hell….” That’s why this Church seems so strangely empty. The one for whom it was built, the one whose presence draws us on Sunday, is not here.

“Crucified died and was buried, he descended into hell.” Nineteenth Century Methodists removed that portion of the Creed, claiming it unbiblical. But it’s not. The First Epistle of Peter speaks of Christ’s descent into hell, called by the Church, “The Harrowing of Hell.” Harrowing is a military term meaning to “make predatory raids or incursions.” Therefore, after Christ’s burial yesterday and through today, Satan’s territory is being invaded by the one who yesterday died upon the cross.

Following his death, when he breathed his last, Jesus descended to hell. Having preached to us, the living, he descended to the dead and is there proclaiming the good news to those who lived and died before his coming.

How did the church come up with such a notion, this “harrowing of hell?”

He is there, doing what he does so well, preaching, teaching, touching, relentlessly seeking, persuading, inviting, and announcing the love and mercy of God. As the Psalmist says, “Thou wilt not leave my soul in hell.” Even Byzantine art depicts Jesus, in the jaws of hell, giving a hand to those who had died, lifting them up out of the darkness.

And though he is down there, and therefore not here, there is something to be said to those of us he has temporarily left behind. That word is this: Because I am there, descended into the deadly darkness, confronting the enemy on the enemy’s own turf, you have hope.

If he is there, literally fighting for the souls in Hell, then we can know with all certainty that there is no darkness, sorrow, or pain we can experience, that his loving presence cannot enter into. If he is willing and able to risk all, to wade deep into the death we so fear and avoid, then what might he risk for us?

Do you remember the stories Jesus told about God and the kingdom of Heaven? The good Shepherd who forever seeks the one lost sheep, the faithful father who awaits the return of the one lost son, the relentless woman who does not rest until she finds the one coin. Jesus meant those things when he said them and he doesn’t mind looking in hell for those righteous souls that departed this world before his arrival.

On that first Saturday before the resurrection the disciples, Mary, and the rest mourned the loss of their savior, but he had not truly left them. He had only gone to complete his Father’s work.

One Reply to “Sermon: Holy Saturday”