Our New Testament reading from St. Peter’s first letter makes a rather interesting statement. Speaking of Jesus, Peter writes, Jesus “was put to death in the flesh, but made alive in the spirit, in which also he went and made a proclamation to the spirits in prison, who in former times did not obey.” It is from this passage that we receive those lines from the Nicene Creed which read, “He suffered under Pontius Pilate, was crucified, died, and was buried and He descended to the dead.” We understand this to mean that after Jesus died, he descended into hell, where he preached to those souls who had not the benefit of hearing his teachings prior to his coming. It is in this same passage from Peter that he speaks of those who died in the great flood during Noah’s lifetime, “when God waited patiently in the days of Noah, during the building of the ark, in which a few, that is, eight persons, were saved through water.”

This particular passage speaks of how, like those eight persons who were saved through the waters, we too are saved through the waters of Baptism, but it also reminded me of something Jesus said about his second coming when he also referenced those days of Noah, part of which we discussed last week: Jesus said, “But about that day or hour no one knows, not even the angels in heaven, nor the Son, but only the Father. As it was in the days of Noah, so it will be at the coming of the Son of Man. For in the days before the flood, people were eating and drinking, marrying and giving in marriage, up to the day Noah entered the ark; and they knew nothing about what would happen until the flood came and took them all away.”

The people in Noah’s time had no idea that the Lord was coming. They were going about their business as though they would live forever, never giving thought to the hereafter. Jesus was also saying that at his second coming it would be the same. Even though it is speaking specifically of those days of the second coming, I would suggest to you that it is also speaking of “these days.” You don’t have to look too hard to realize that many today are walking around unaware of the Lord.

There was a remarkable story that came out in the Washington Post a few years ago. An event took place at a Washington, DC Metro Station on a cold January morning: It seems that a man with a violin played six Bach pieces for about 45 minutes. During that time, approximately 2 thousand people went through the station, most of them on their way to work. After 3 minutes, a middle-aged man noticed that there was a musician playing. He slowed his pace and stopped for a few seconds, 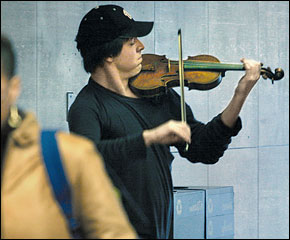 and then hurried to meet his schedule. 4 minutes later: The violinist received his first dollar; a woman threw the money in the hat and, without stopping, continued to walk. 6 minutes: A young man leaned against the wall to listen to the violinist, then looked at his watch and began to walk again. 10 minutes: A 3-year old boy stopped, but his mother tugged him along hurriedly. The kid stopped to look at the violinist again, but the mother pushed him hard, and the child continued to walk, turning his head all the time. This action was repeated by several other children. Every parent, without exception, forced their children to move on quickly. 45 minutes: The musician played continuously. Only 6 people stopped and listened for a short while. About 20 gave money, but continued to walk at their normal pace. The violinist collected a total of $32. 1 hour: He finished playing, and silence took over. No one noticed. No one applauded, nor was there any recognition.

No one knew this, but the violinist was Joshua Bell, one of the greatest musicians in the world. He had played one of the most intricate pieces of music ever written, with a violin worth $3.5 million. Two days before, Joshua Bell had sold out a theatre in Boston, where the seats averaged $100 a piece. This is a true story. Joshua Bell playing incognito in the metro station was organized by the Washington Post as part of a social experiment about perception, taste, and people’s priorities. The questions raised: In a commonplace environment at an inappropriate hour, do we perceive beauty? Do we stop to appreciate it? Do we recognize talent in an unexpected context?

One possible conclusion reached from this experiment could be this: If we do not have a moment to stop and listen to one of the best musicians in the world, playing some of the finest music ever written, with one of the most beautiful instruments ever made, how many other things are we missing?

In our Gospel reading today, Jesus said, “If you love me, you will keep my commandments. And I will ask the Father, and he will give you another Advocate, to be with you forever. This is the Spirit of truth, whom the world cannot receive, because it neither sees him nor knows him. You know him, because he abides with you, and he will be in you.”

Jesus says that the world will not see or know the Holy Spirit. Why? Because the world is very much like that Washington DC Metro Station with thousands walking by, so involved in their own lives that they fail to recognize – to hear beauty – and in a similar manner the world fails to stop to hear and see God.

Unfortunately, when I say the world fails to see and hear God, I have to include us as well. That Washington Post noted that only six people stopped and listened for a short while and in that categorization of the world, I think those six could be marked up as the Christians, who only briefly stopped.

In the days of Noah the people were going about their business, paying no attention to God. We do the same thing today. I believe that you all have spent more than __ minutes with Him this week, but there are those days when the Creator of the Heavens and the Earth and our Savior, never cross our minds. Jesus said, “those who love me will be loved by my Father, and I will love them and reveal myself to them.” But how can he reveal himself, if won’t stop long enough to see and hear?

The Lord says, “Be still, and know that I am God” The Lord is not far from anyone of us, but we must “Be still and know that He is God.” We must take the time to allow him to reveal himself to us.

The French Missionary Jean Eudes, speaking of Jesus writes, “He belongs to you, but more than that, he longs to be in you, living and ruling in you, as the head lives and rules the body. He wants his breath to be in your breath, his heart in your heart, and his soul in your soul, so that you may indeed ‘Glorify God and bear him your body, that the life of Jesus may be made manifest in you.’”

Jesus desires to be made manifest in you, that is, to be made clearly visible within you. The question then becomes: Is that what you want? To answer “No” isn’t saying you desire to be damned for all eternity, but it does say – like all those that missed out on the beauty of the music in the Metro Station – that you are willing to pass by the beauty of God. My prayer for us all is that we will learn to be still for longer than __ minutes a week, to see and hear the beauty of our Savior, and to know that He is God.